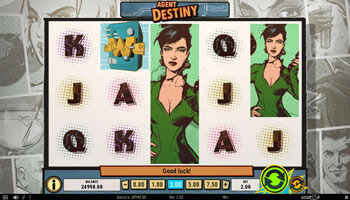 Agent Density is a five reeled video slot with 20 lines by Play n Go. As you can predict from the name, it is about a secret agent who is trying to keep the world safe for the evil megalomaniacal masterminds who want to take over our planet. The slot machine has a 60s theme and brings back a lot of secret agent nostalgic memories. The slot has plenty of winning chances and bonuses, including Mega Symbols, Free Spins, and Linked Reels. The Play n Go slot has wonderful visuals and sound effects, and it will help create an immersive adventure like none other. Agent Destiny is playable across multiple platforms and devices. Therefore, you can enjoy Agent Destiny on laptops, desktops, Windows phones, androids, and iOS devices.

Agent Destiny by Play n Go is a fun and action-packed game. It has a 60s theme, which brings back nostalgic feelings from 60s secret agent shows like Secret Agent Man. In this game, you will join Agent Destiny in her adventures as she tries to stop the crazy megalomaniacs and masterminds that are scheming to take over the world. You can expect a lot of action, animations, and a fun ride with a huge nostalgic effect.

Popular spy movies inspire agent Destiny's spy theme as well as TV shows from the 1960s. The game's graphic style is inspired by the highly popular and prolific style of Adam Hughes, the comic book artist. Therefore, you can expect comic-book-like visuals that are colorful, as they stand out against the white and black comic book backdrop.

The icons that will spin on the reels of the slot include stylized royal symbols from a deck of cards. They also include Agent Adam, and the crazy masterminds (Madam and the Doctor), as well as Agent Destiny herself.

The slot has plenty of winning chances; the highest paying symbols are the two mastermind villains. They can give up to 15x the stake when you get five matching ones on the same line. The wagering range of the game is between 0.1 and 100 credits. As for the RTP, it has an impressive one of 96.26%.

Agent Destiny has plenty of bonuses and features. There is the Linked Reels feature that can be activated at random. When that happens, adjacent reels will have the same symbols, and it can happen on reels 4 and 5, as well as 3, 4, and 5.

It also has the Mega Symbols, in which all character icons and the wild safe can appear as mega symbols that can vary in size and can trigger massive payouts. Last but not least, there is the free spins feature, which you can trigger through the scatter icon to claim up to nine free spins.

Microgaming New Slots Slot Apps and Casino Games
Tarzan and the Jewels of Opar
May 5, 2021
0 1582