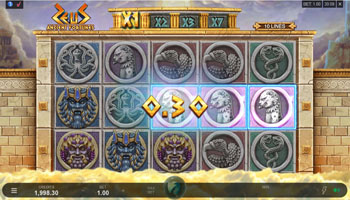 Ancient Fortunes: Zeus is a Microgaming slot that has a mythical theme. It revolves around the ancient Greek Mythology. So, you can expect an adventure that takes place on Mount Olympus with Zeus and the rest of the gods. The slot has the Rolling Reels feature, a multipliers trial, a wild symbol, and free spins. Ancient Fortunes: Zeus is a highly compatible title that you can enjoy on a tablet, an Android Smartphone, or an iPhone. It has a high RTP, a wide betting range, and overall fun and a rewarding slot adventure.

Ancient Fortunes: Zeus has an epic Ancient Greek Mythology theme. It is going to take you to the gathering place of the gods, Mount Olympus. You will join mythical deities and creatures from Greek Mythology such as Hermes, Ares, Dionysus, Zeus and Poseidon, and Medusa. So, get ready for a one-of-a-kind slot adventure with the Greek Gods for a chance to claim your share of the Greek fortunes, golden treasures, and riches.

Ancient Fortunes: Zeus has a marvelous theme that it creates through its visuals. The symbols appear in the form of square marble blocks of stone that form the reels. These blocks depict the different mythical gods of Greek mythology, such as Poseidon, Zeus, Medusa, and Ares. They also include the lightning symbol, the Kraken, and more. They form a 5×3 format that hosts ten paylines.

You can place wagers that vary between 0.10 and 70 credits for each spin of the reels. There are no coin ranges or bets per line, and it is a single betting option. The payout percentage of the slot is equal to 96.02%, with a maximum reward of 625x the stake. You can view all of the payouts and the bonus features of the slot at the paytable.

Ancient Fortunes: Zeus has bonus features and winning chances that you can take advantage of during the gameplay. The mythically themed video slot has a wild symbol, free spins, and more.

Zeus, the king of the gods, is the wild symbol of the video slot machine. He is going to use his godly powers to substitute for other icons on the reels, except the unique symbols.

The Free Spins Round:

The Golden Lightning symbol is the scatter icon that can trigger the free spins round of the slot. You will need to get from three to five of these symbols to trigger from ten to twenty free spins. If you get more free spin icons, you can activate additional free spins.

The Rolling Reels function is one of the favored features of Microgaming. Whenever you create a winning combo, you will trigger the Rolling Reels, which will eliminate the matching symbols, opening the way for new ones. The Rolling Reels feature will give you more winning chances. That is not all, as there is also a multiplier trial, which triggers a multiplier with every consecutive win. The multiplier can amount up to x21 during the free spins.

Microgaming New Slots Slot Apps and Casino Games
Tarzan and the Jewels of Opar
May 5, 2021
0 1677