Captain Cash invites all of you to go with him on a great sea adventure as he travels across the seas and the oceans on his private boat so you can search for treasures and fortunes in the far corners of the world. Captain Cash has earned his nickname from the great pays and awards that he gives to people who accompany him. All what you have to do in order to go on that adventure is to place a bet, spin the reels and watch as Captain Cash submerge you with the great pays that he has in store for you.

Under the three reels of the game, players will see captain cash in his captain outfit and hat as he rides his own boat in the open sea while holding his favorite drink in his hand. Despite the fact that the game has a classic setup of 3 reels, it does not offer players 1 payline, as it offers them five different paylines that come scattered on these reels. This means that instead of having 1 chance to earn a payout, players will have 5 different chances with every spin of the reels. Players can place their bets on these lines under the exciting reels of the game where they will see the buttons that form the control panel of the game.

They will find the coin value buttons that they can click on so they can go through the different values available. They will also find the Bet One button that they can click on to decide how many coins they wish to place on each line, they can place one, two, three, four or five coins. The bigger the bet, the higher reward that they will be able to claim. All of the different rewards that Captain Cash can give to players are listed on the right side. They will view all of the different winning combos and the payouts that each combo can give them. The symbols include Captain Cash himself, red sevens and bar symbols.

The Captain Cash symbol is not an ordinary one as it represents the highest paying icon that the slot machine has. It can give players from 1000 coins to 5000 coins in rewards when 3 of them land on any of the win lines. It also acts as a wild icon that can replace all icons on any of the paylines of the fruit machine. 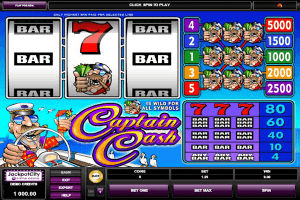 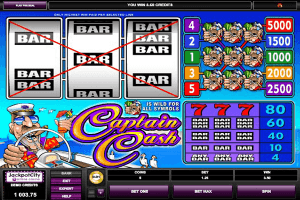 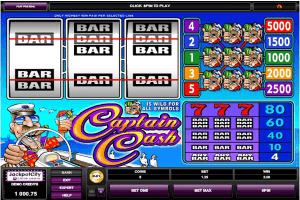 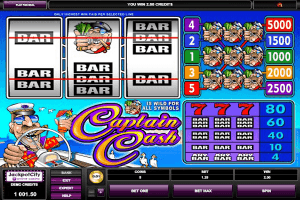