Microgaming is inviting all of its players to accompany the Cool Wolf in his night life adventures as he hits the night clubs to hook up with the pretty ladies while having fun. Players will not only accompany him on his adventures for the fun and the excitement, but for the rewards as well, as the Cool Wolf is well known for his generosity as he pays very well for the people who accompany him. All what the players have to do is place the bets and start spinning the reels of the game so the rewards can start rolling in.

The game depicts the theme of the game through its visuals and the great audio effects hat players will hear in the background while spinning the reels. The symbols will spin on the 5 reels of the video machine and they are scattered across the 243 ways to win that the slot machine has. This format is a high paying one that pays much more than the usual paylined video slots. The game also has the rolling reels feature which gives players more chances of winning during every round.

These symbols include the cool wolf himself, two fine and beautiful ladies in the club, his American muscle red car, a nerd in big glasses, Cineplex cool Wolf symbol, stacks of cash and sun glasses and poker card symbols. Players will also notice that the slot’s reels are located in the street right in front of cool wolf’s favorite night club.

The cool wolf logo is the special wild symbol of the video slot. This means that whenever players spot the wild logo on the reels, they know that they have a better chance at winning since this symbol can replace all other icons, except other special icons, in order to contribute in the creation of a payable combo of symbols. There is also the Howling Wild feature in which the 2nd, 3rd or the 4th reel will turn into wild ones randomly with guaranteed wins. The rolling reels feature is not active during the Howling Wild feature.

The scatter golden tickets can activate the free spins round, all what players need to get in order to do that is get at least 3 scatters on the reels. This will enable them a number of free spins that depend on the amount of scatter tickets that landed on the reels. Players can earn from 15 to 25 free games. 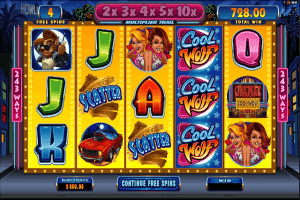 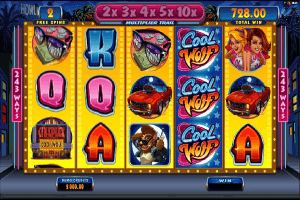 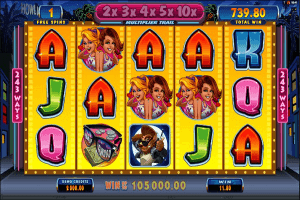