Are you ready for the Frost Bite, you better be, this is because this slot machine that is conveniently named Frost Bite will bring you just that, a freezing and an exciting experience that is fun and rewarding at the same time. The game will take players into the frozen north pole that is known for its ice storms and cold weather where they will search for the great treasures and fortunes that lie underneath the snow. They will be able to claim their share of these fortunes by placing their bets and spinning the reels of the game so they can start forming winning combos to get paid.

Frost Bite is a classic Microgaming slot machine that comes in three reels and one single payline that players can find in the middle of these three reels. The entire interface of the game is inspired by the freezing weather, this is why the colors white and blue are the ones that dominate the interface of the slot machine. Even the symbols that will land on the reeks are inspired by the theme as they include the frost bite logo, snowflakes, blue bar symbols and an ice giant.

These symbols will pay players in different amounts whenever three of the land on the wining line of the game. Players will be paid according to their bet and the award of each symbol that can be found at the game’s paytable. The paytable is found on the right side of the reels. It consists of three columns, each column will show the award for each specific symbol for the different betting levels as players can place 1 or 2 coins. 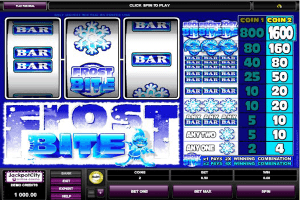 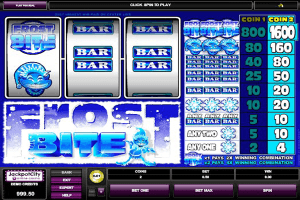 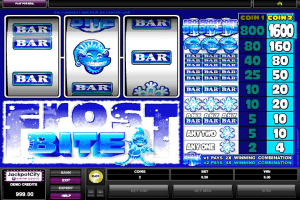 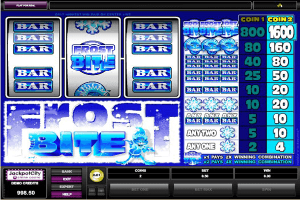