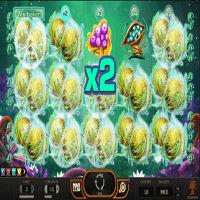 Apparently, the images are inspired by creative sculptures of fruit-themed carvings. They look like exquisite colourful growths artistically illustrated as reel icons of the 5-column slot reel. The greater significance of the visually attractive images though is the activation of the Re-spin and Win Multiplier features. The simultaneous and multiple appearances of matched Fruitoid symbols in any one or more of the game's 25 paylines, launch the aforementioned special win-boosting attributes.

Three, four, or five Fruitoids icons emerging in a payline after a paid spin trigger a Re-Spin. All winning symbols remain frozen and stuck to their respective position during the bet-free spin. If the outcome of the re-spin includes one or more of the winning symbols, then those symbols will likewise stay frozen and re-trigger another free spin.

The occurrence could be cyclical for as long as the reels return with the additional winning Fruitoid symbols, whilst creating more matched combinations in greater numbers and higher payouts. The rewarding results could extend beyond the coin prizes gained from the re-spin occurrences. This Yggdrasil online slot pays more, once the Win Multipliers become active.

Slot player should take note of the x2, x3, x4 and x5 Multipliers appearing at the top of Reels 2, 3, 4 and 5. Those factors are the number of times with which payline wins will be multiplied once the consecutively appearing Frozen Symbols fill up the corresponding reels.

The Win Multiplier progression starts with x2. This feature launches if the consecutive wins have filled the first two reels with the same kind of winning payline symbols. Should the next re-spin outcome produce additional symbols that fill up Reel 3, up to Reel 4 or 5, the Win Multiplier applicable to the latest payline rewards will be the same as the number of reels filled with the winning symbol.

If a different Fruitoid symbol also formed a payline win after a re-spin, the payout for that symbol will be credited immediately. The rewards due on the original winning symbol that triggered the consecutive wins will be paid as soon as the uninterrupted re-spins end.

User Rating: Be the first one!
Bonnie Trelane
Back Pyrons
Next DJ Wild