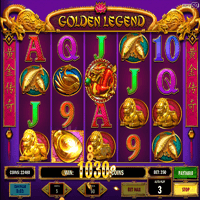 Golden Legend by Play'nGo is a 5-reel online video slot that takes inspiration from Ancient China's four celestial animal symbols. Regarded as guardians of the four (4) main point of directions North, South, East and West, Golden Legend slot presents creatures popular in Chinese tradition, as bringers of luck and fortune. Perhaps, the idea is to create good vibes, while players spin in order to land on matched icons in any of the 50 non-fixed payline selections.

The Golden Tiger, designate Guardian of the West, pays the highest number of coins at 1,000 for every 5-of-a-kind combination formed in an active payline. Both the gilded images of the Foo Dog (East) and of the Tortoise (North) pay 500 coins, while the Golden Phoenix (South) and the Goldfish symbols pay 400 coins for every 5 same-symbol-combinations.

The Goldfish, the fifth of the high paying totems of the game, albeit not a celestial symbol is an important element, as ardent followers of ancient Chinese symbols believe the presence of the those creatures will likely attract wealth in abundance.

The Dragon as Scatter and the Golden Sycee as Wild Symbols

China's popular symbol of strength and power, the Dragon, takes center stage as the Scatter Symbol. It appears with a promise of bringing good fortune via the free-spins round. The boat-shaped Golden Sycee, an early Chinese gold coin, pose as the Wild Symbol of the game. It can be used as replacement for all regular icons, to form three or more matched combos.

Play'nGo adorned the Dragon Scatter Symbol with a jaded green eye, perhaps to bring more luck to Golden Legend slot players. After all, three or more of such symbols appearing anywhere across the reels, trigger the launch of the Free-Spins game. As bonus round of the game, ten bet-free spins are awarded to players.

During the free-spins bout, the Dragon Scatter symbol remains in play; denoting that if another set of three or more of such symbols appear as outcomes of a spin, another set of 10 bonus spins extends the free game.

Although the bonus round uses the same reels, Play'nGo configured the game with a mechanism that adds more of the Golden Sycee Wild Symbols to the reels.

Golden Legend free-spins players will notice two rows of Golden Sycee overlays appearing in Reels 2, 3, 4 and 5, indicating that some of the symbols have been replaced with Wilds. As more Golden Sycee Wilds are added to the reels, the greater the possibilities of a spin returning with one or more full-reel Stacked Wilds as outcomes. Naturally, the more Wild Symbols in place, the higher the chances of hitting multiple matched-symbol combinations with a single bet-free spin.

Prolonged free-spins play and multiple matched symbol combos will make it possible for bonus game players, to win as many one million-coin rewards from the Golden Legend slot.

Players have the option to double or quadruple their most recent win. Every time a spin results to a win, the GAMBLE button appears right next to the SPIN button. The Gamble game constitutes two mini card-guessing games. The first game entails predicting the color of the next card, to which a correct guess doubles the amount of the latest spin-win. Making a correct guess, enables a player to gamble further in a card-suit guessing game. Winning in the second game quadruples a player's winnings. However, players should keep in mind that they also risk losing their recent spin-win for making incorrect guesses.