The video slot machine is an all Pays slot, as it has no paylines. Players can check out all of the winning possibilities and how to earn a payout at the paytable of the game that they can open by clicking on the View Pays button.
The game has a gritty and a grim looking interface with fits the dark story that it is themed around. Also, all of the icons that will appear on the slot machine are inspired by the story as they include the potion, Jekyll, Hyde, the logo of the game Dr Jekyll’s love interest, a fiery wild icon and poker card icons that come in colorful designs.

Scatters and Wilds of the Free Slot

The Wild symbol of the game can replace all other icons on the game’s reels and lines in order to aid player in their quest of forming a winning combo in order to be able to claim a payout. When the wild symbol appears to replace other icons, only the highest possible payout is paid to the players. Also, the only icon that the fiery wild symbol can’t substitute for is the scatter icon, which is represented by the logo of the video slot, Jekyll & Hyde.

The scatter symbol gives out generous scattered rewards to lucky players as well as triggering the Mr. Hyde bonus feature when 3 of them land on the reels. This round gives players 10 free spins on the slot machine during which all Dr. Jekyll symbols will turn into Mr. Hyde icons in order to increase the winning chance for the players. 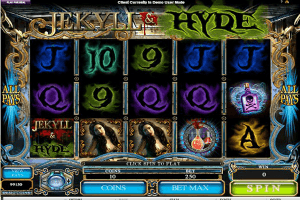 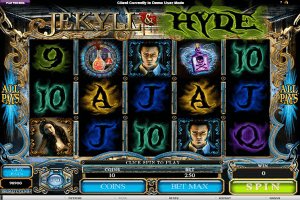 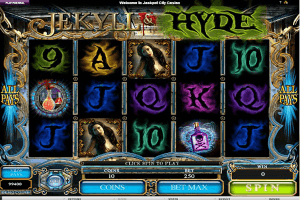 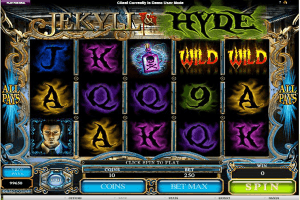