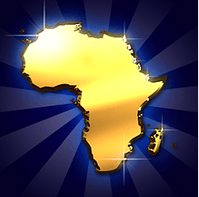 Kalahari Sun Slots is an African-themed, feature-rich game app for users of smart phones and tablets supported by Android OS versions 1.6 and up. This app furnishes players with a play-for-fun slot entertainment that could go on uninterruptedly, if you so wish. The app automatically replenishes game credits with additional coins, once the balance zeroes out.

To get into the game, tap on the minimal Kalahari Sun Logo found on the bottom left of the app's user interface and you will be presented with the Kalahari Slots game itself. The larger icons bearing other slot titles, are actually offers of more free slot games, but which you have to download as additional app to install in your Android device.

You have the option to play the game via a 5-reel or 6-reel grid, with 25 fixed paylines. The reels are filled with different African Wildlife as high-paying symbols, mixed with the A, K, Q, J and 10 card elements as low-value reel icons.

Take note of the Golden Africa contour image as this represents the game's Scatter Symbol. The appearance of three (3) such symbols in any row or reel, signals the activation of three African Adventure Free-Spins Bonus Games, namely the Locked Wildcard, the Wild Diamond and the Golden Mask Free-Spins Rounds. Once those choices are presented to you, tap on your choice of bonus game in order to set in motion the corresponding reels and the free spins.

The Locked Wildcard Spins offer the least number, with eight (8), twelve (12), or sixteen (16) bet free spin rewards, and awarded based on the number of Africa Scatter Symbols that activated the Bonus Game. The Diamond icon serves as the Wildcard that can be used as substitute for regular symbols to help create one-of-a-kind icon combinations in payline. Bonus multipliers appear at random on Reel 1 or Reel 5, and together with the Diamond Wildcards, they are locked in the same position throughout the duration of the free game.

The Wild Diamond Spin awards as many as 10, 15, or 20 spins based on the number of Africa Scatter Symbols that emerged across the reels. A Diamond Wild symbol appears after every spin and remains locked in place until the end of the free-spins round. This feature will likely fill the screen with quite a number of Diamond Wilds that can substitute for any regular symbol.

The Golden Mask Bonus Game – offers as many as 50 free spins. Here you will be presented with several Golden Masks and behind each mask is the number of free-spins to play in the bonus game. During the free round, a Golden Mask at the top of the screen, generates cash rewards at random occurrences and in random amounts.

Fifteen (15) Drum Symbols will be presented to you, each with a Mystery Number to unravel and from which you will select five Drum Symbols. If the Mystery Numbers revealed aggregate to a total of 100 or more, you win the progressive Lucky Drum Jackpot.

Kalahari Sun Slots is a great simulation of a casino-style slot entertainment, presented without frills or level completion requirements. The downside to a single-slot app though, is that playing with the same set of reel icons and game features over and over via a single app, could likely become less exciting and challenging at some point.

Get the App Here