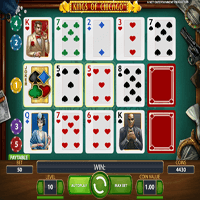 Kings of Chicago by NetEnt effectively combines the concept of slot gaming with poker play to deliver a new kind of playing experience. A 5-reel online video slot, Kings of Chicago slot makes use of the standard poker hands as high-paying pay line combinations, appearing in any of the game's five (5) bet lines. The positions of the card symbols in a payline do not have to follow the exact order of a poker hand combination.

Kings of Chicago slot players can achieve regular wins by aiming to land on three or more like-symbols in a bet line. The position of the one-a-kind symbols in a payline does not have to be in adjacent reels, for as long as each matching symbol falls within the payline pattern.

The presentation of the playing cards as reel icons mimics the card-dealing motions used in a video poker game. Instead of placing bets on a spin, Kings of Chicago slot players place wagers on a card deal. Each deal is for five sets of five-hand poker cards on which they can stake one (1) coin per hand or as many as ten (10) coins per hand. The value of the bet placed per deal will be based on the coin value selected by a Kings of Chicago slot player, anywhere between 0.01 to 1.00, multiplied by the number of coins placed as bet on each card deal.

Players can win big on deal outcomes that form poker hands such as a natural Royal Flush, a Royal Flush with Joker substitution, a Full House, a Straight Flush, a Flush, and a Straight. The natural Royal Flush pays the highest, awarding as many as 1,000 coins as payout. A five-of-a-kind hand in a payline pays 1,500 in coin rewards. The equivalent payout value of the coin rewards depends on the amount of bet placed per deal.

The Joker card is the Wild Symbol of the game. Aside from having the capability to transform an icon into the card symbol needed to form a winning combo, the game pays twice the payout value if the payline win was formed with the help of a Joker Symbol.

In addition to the Free-Deals, the Kings of Chicago slot bestows Scatter Pays of 2, 15, 50, or 500 coins for every two or more Scatter-labeled card icons.