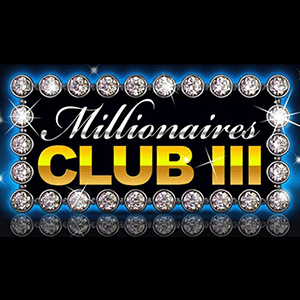 Millionaires Club III Free Slots edition is the third game in a series. It is a slot game that’s designed to make you feel like a millionaire. It’s been built with making millionaires in mind. You can see the slick, smooth and cool design of the slot, the symbols that just screams, “rich”, the animations that flash glitter and glamour on you… it’s really a Millionaires' Club.

Although it’s the third entry in the series, this game can still be enjoyed by many gamers, new or old. This is the definitive version to play because it improves on everything the previous games already established for this wonderful series.

The game is 5 reels and has 20 paylines. The best feature of this game is the progressive jackpot and unlike other slot games, this slot game lives up to its grand name. Why? Because anyone can become an instant millionaire in this game! That’s right… the jackpot can go as far as a million dollars and anyone who gives this game a go will have a dastardly chance to win the jackpot. Anyone can win so what are you waiting for? Your entry to the Millionaires Club starts from the bet.

Betting ranges are all for the benefit of everyone, from the savers to the riskers. While it doesn’t mean you’ll see the progressive jackpot go up due to the paylines increasing, you’ll get more coins and more coins means more bets. This gives you the chance to head out for the big progressive jackpot. Oh yes!

Too lazy to play like a millionaire? Why not take the auto-play feature and set it up nicely? You can use the auto-play to randomly spin 999 times. If you want to get a shaken not stirred martini or a rib-eye steak worth $1000, now’s the time to do that while the game spins for you.

Just like all the other games made by Cryptologic, you can bet the game contains all the cool symbols you need to win: wilds, scatters, multipliers and bonuses. The wild symbol is the mansion. Actually, it’s not just the wild but it’s also a scatter symbol. With this kind of dual function, your chances of getting more winnings is to be expected. Again, the mansion can substiture for any symbol to make a winning combo except of course, the bonus symbol. Even if the mansion doesn’t align up, it will activate the scatter function so you’ll still win some more cash. Who wouldn’t love that?

The main bonus round in this game is the gem round. Here, you’ll be presented with over 100 gems. Just take a pick and each gem will show you an instant cash prize, some multipliers and other cool prizes. The best to get from this round is the jackpot icon while the worst to get is the strike. The round ends if you get either three jackpots or three strikes. Whatever you end up with, you’ll return back to the main game. If you got prizes and the jackpot, these two will be combined and it will add up to your winnings. If you got the strike and the prizes, only prizes add up to your winnings. This is a remarkable improvement over the previous games. So no worries of losing bonus stuff from the bonus round.

If being a millionaire in a slot game confuses you, you can always take a gander at the rules and help page. All the things you need to make a good run with this game is all in the page, from the values to the patterns.

In short, Millionaires Club III is one of the best slot games around. With its slick design, cool bonus features and life-changing jackpot, you’ll be rest assured that one day, you too will become a millionaire in the club. Not a virtual one per se, but a REAL one.