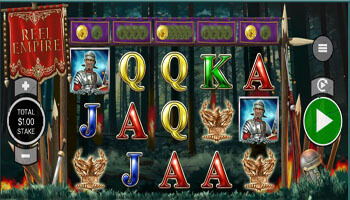 Reel Empire is a video slot machine by Core Gaming that has a Roman Empire theme. It will take you on an action-packed ride as you join the Roman Empire's legions as they invade the world for the glory of the Roman Empire. The slot machine has impressive 3D visuals and animation that will create an immersive ride. It is not all about the slot's visuals, as Reel Empire is also a high-paying slot with a medium variance. It hosts plenty of winning chances through the 20 paylines, as well as its bonus features. These features include Scatter icons, free spins, and wilds. The slot is compatible with a variety of devices and operating systems, and it is available at many casinos, including Vegas Paradise casino.

Reel Empire is a Roman Empire themed video slot machine. The Roman Empire is one of the greatest empires in the world, which stretched from one end of the globe to the other. In this slot, you will join the Roman Legion under its banner as you invade new lands and claim your share of the war loot and treasures.

Reel Empire has a five reeled setup with three rows of symbols and twenty lines. It has a beautiful and eerie backdrop representing a war-ridden forest with fires, swords, and wooden stakes. The reels are completely transparent so that you can see all of that in the background in detail. The symbols include the Roma Banner, Aquila, Roman soldiers, weapons, and card symbols.

The betting range of the slot machine lies between 0.20 credits and 100 credits for each spin. The slot machine has an RTP of 95.93%, which fits its medium variance status. The icon that will trigger the most significant payout is the wild shield. It can trigger a prize of 1,250 credits. You can trigger it when you get 5 of the wild shields upon placing the biggest stake.

Reel Empire is a bonus packed slot machine by Core Gaming. It has Scatter icons, free spins, and a wild shield.

The Roman Shield is the wild icon of the video slot machine. It can substitute for other symbols, and it can also trigger the max line prize.

There are gold coins that you can collect on each reel. Above each reel, there is a pot counter, and any gold coins you collect will count towards it. When you fill it, the reel will turn wild, which can help create numerous payouts.  The number of golden coins needed to trigger the wild reel will correlate with the number of triggered Wild Reels. Also, some of the wilds that will appear on the wild reels will come with a multiplier. The multiplier can amount up to 5x.

Bonnie Trelane
Back Agent Destiny
Next Rise of Merlin