This game, Rhyming Reels L Hearts & Tarts, is one of the games from Microgaming’s Rhyming Reels series. This is why throughout the game play, as players spin the reels of the game, they will hear the beautiful rhyming of the reels with special sounds that will be triggered when players succeed in creating a winning combo. The game is themed around a lovely and a friendly restaurant that is all about love. This is why players will see that the color that dominates the interface of the game is the color of love, red. On top of that, all of the symbols that appear on the reels of the game are inspired by the theme of the slot as they include heart shaped tarts, heart stamped oven mitts, a crown with small red hearts, two lovely waitress with trays of food, the Hearts and tarts logo of the game which comes on top of a big red heart, the chubby Queen of hearts and poker card symbols that come in designs that fit the theme of the game.

The game is offered to online players in 30 winning lines that come spread across the five spinning reels of the game. On these lines, players can create winning combos in order to earn payouts. The winning combos consist of 3 matching symbols, at least, on the same line from the left reel to the right ones, on consecutive reels. The amount of the winnings will depend on the matched symbol as each icon will pay players differently, players can check the different line pays at the paytable of the game. The bets would also affect the amount of the winnings. Players can place these bets under the reels as they go through the wagering options that include how many paylines they want to activate, the coin value and the number of coins.

The logo of the game is its wild card, which means that it will substitute for all icons during the game play in order to aid them in getting paid. The chubby queen of hearts is another wild icon that can appear stacked during free spins or the normal game play.

The scatter golden crown is a special symbol as it can trigger the free spins round for lucky players. This happens when 3 of them land on the reels. Players will earn 10 free spins on the video slot. 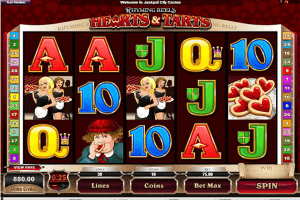 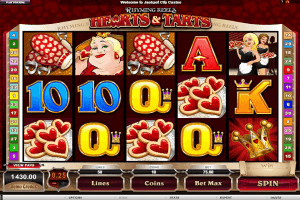 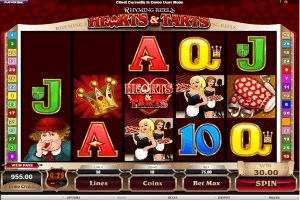 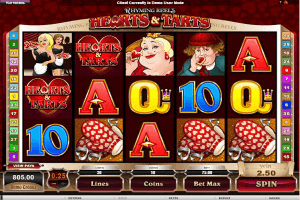