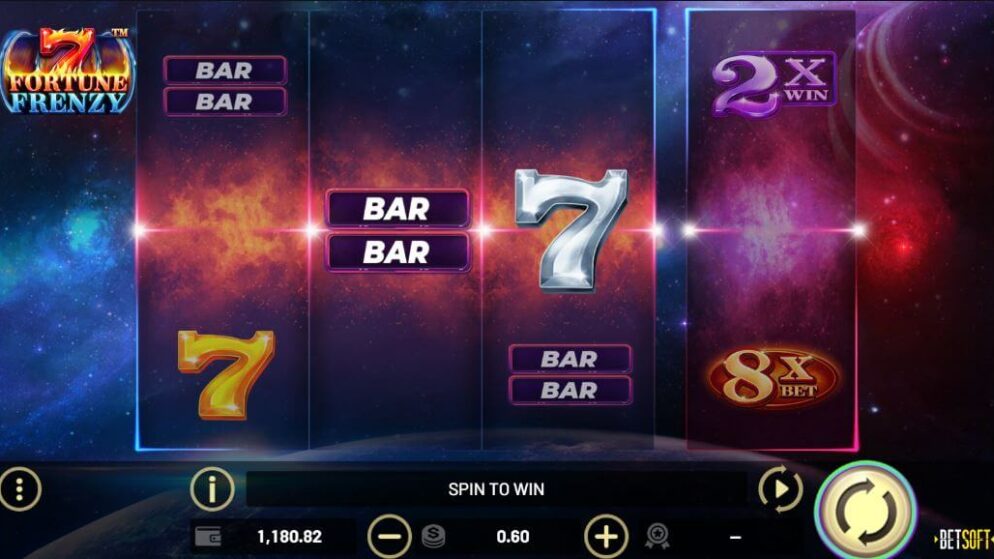 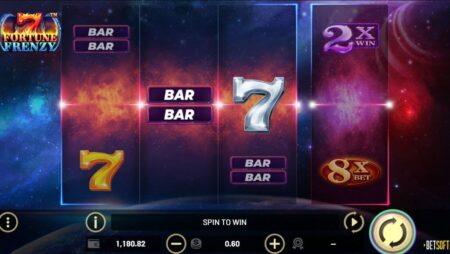 7 Frenzy Fortune is a new BetsoftGaming powered slot that has three standard reels with a single payline. It has a bonus feature that is a game-changing feature, which will make you set at the edge of your seats and creates an engaging gameplay. The game has a majestic background with visuals and sound effects, which creates a highly immersive game. The game has a cool retro electronic theme with a broad bouquet of features and bonuses. These features include multipliers, re-spins, and much more. 7 Fortune Frenzy is a fast-paced game and a beautifully rendered one. You can find more about it here through our in-detail review, and you can also spin the reels of the new Betsoft slot.

7 Frenzy Fortune by Elk Studios is an exciting slot machine that offers an interplanetary experience. It takes place among the stars yet offers classic gameplay in terms of the format. On the other hand, it offers modern gameplay with bonuses, multipliers, re-spins, among other features.

7 Frenzy Fortune is a unique game, visually and gameplay-wise. It takes you to outer space, with the vast cosmos behind the reels. The reels are transparent to showcase the beautiful visuals behind them. It is colorful, vibrant and creates a highly immersive experience and a wild visual ride. The game has three reels and an additional fourth reel, which represents the gateway to the bonuses that the game has to offer. As of the symbols that will land on the reels, they include 7s, bar symbols, golden 7s, and fiery 7s.

7 Frenzy Fortune has three reels with a single line with a fourth bonus reel. You can earn plenty of rewards through these lines, with a top jackpot of 2368x the stake. The slot machine is of medium volatility with an RTP that is around the common average of 96%. As for the stakes that you can place per spin, since the game has one active line, so it has a rather limited stakes range. It varies between 0.06 and 30 per spin.

7 Fortune Frenzy has three regular reels that have a red fire framing graphic when they spin. On the other hand, four bonus reels come with a blue framing. You will need to line up three matching symbols on the single payline, plus one out of the three symbols on the fourth reel. That will enable you to trigger the corresponding Bonus Frenzy special feature. The regular payout will then be subject to a multiplier that varies between x2 and x8. You can also trigger an instant cash prize that can be equal 8x or 18x the stake. That is not all, as there is a third alternative, which is the Re-spin feature. You will trigger that via the re-spin symbol, which initially activated a single re-spin. You will also guarantee a line-up again on the three regular reels, and this can award a repeat win with a multiplier between 1x and 4x with the ability to land another re-spin. It lets you trigger this feature up to five times for each spin.