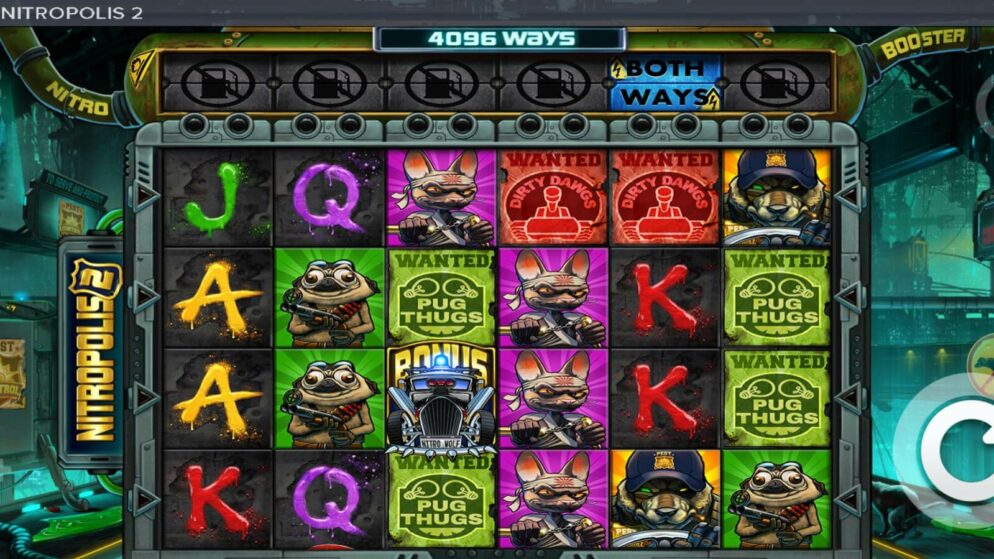 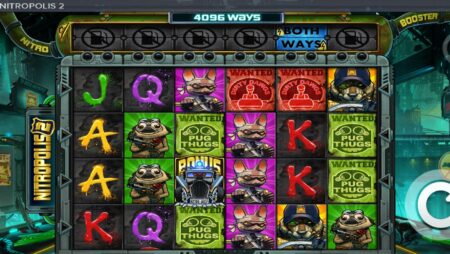 Elk Studios invites you to go back, once again, to the post-apocalyptic Nitropolis world through this sequel, Nitropolis 2. The game plays on six reels with 3096 ways to win with an increasing number of symbols for each reel for a crazy number of ways to win. In addition, there are Nitro Booster features that pay both ways, added wilds, and much more. Nitropolis 2 has a max reward of 10000x the stake. The game, like the previous game, comes in great visuals and sound effects that result in immersive gameplay.

Nitropolis 2 is the sequel to the highly popular 2020 slot by Elk Studios, Nitropolis. It will take you to the post-apocalyptic world. It is a dystopian future that feels like something from the Blade Runner movie, with a comic book feel to it. However, there is one catch, this is not a post-apocalyptic human world, but an animal dog world. It is unclear whether it has always been like that or did the apocalypse prompt the rise of dogs as the world's leaders. Either way, you will join a group of dogs in an explosive-packed video slot with a rewarding adventure.

The slot has a 6-reeled setup with 4096 ways to win that can increase to reach more than 1 million. The slot machine has a similar visual style to its original game, which occurs in the post-apocalyptic dog world. You will see futuristic high-rise buildings in the background, accompanied by a hypnotizing soundtrack that adds to the chaos that ensues. There are three main animal clans: the Gritty Kittens, Pug Thugs, and the Dirty Dawgs. They appear as symbols on the slot alongside wanted posters and A to J royals.

Nitropolis 2 by Elk Studios has a six-reeled setup with four rows and 4096 ways to win. The game has an expanding gameplay, so it offers ways to win up to 191,102,976. You can claim a reward when you get three or more matching symbols on adjacent reels. The slot has stakes that vary between 0.20 and 100 credits for each spin, with auto spins and a Quick Play mode. The game has a below-average RTP of 95% with a hit frequency of 20%. It is a highly volatile title with a max reward of 10000x the stake.

Nitropolis 2 has bonus-packed gameplay, and it offers more than 12 bonus features. The Nitro Reels is the key to its massive wins. On any spin, Nitro Reels can become active. They will cover two symbols and could contain from 4 to 16 payout symbols. Such a feature can lead to much more symbols appearing on the reels, as each reel can host 24 icons resulting in 191,102,976 ways to win. There are also the Nitro Booster features. There are eight feature symbols that can appear on the reels that can land and impact the reels under them. They include All Premium, Respins, All wild, Nitro Wild, All Match, and the Nitro Match feature