The Pig Wizard is a video slot machine that is themed around none other than, yes you guessed it right, a Pig wizard. It is about a wizard who became a wizard and he invites all of the online players to join him in his magical adventures where they can enjoy the ride and reap the great payouts that the video slot machine has to offer.

These rewarding payouts come in the form of line payouts that players can earn whenever they form a matching combo that contains at least 3 matching icons on the same line, or through the game’s high paying bonus features and rounds. All of these payouts and features can be viewed by players easily by opening the paytable of the game that they can easily view as they click on the Paytable button. 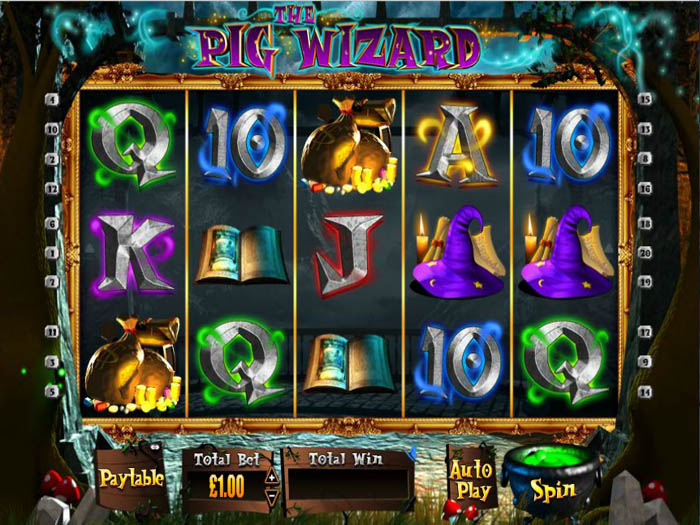 The Symbols of the slot machine

All of the visuals and the symbols of the slot are inspired by the magical theme of the game. This is why the icons include the Pig Wizard himself, a spell book, a wizard’s hat, magical potions and card symbols. Even the spin button comes in the form of a cauldron with a magical green potion inside of it.

The Pig Wizard slot hosts 5 reels and offers players a total of 20 lines that they are invited to place stake on. These stakes can be easily placed under the reels as players will go through the betting option that the Pig Wizard slot has, which gives players the chance to place a bet that varies between 0.20 and 10 per spin. After the bets are placed, they will be able to start the game by clicking on the spin button or they can choose a number of spins at the Auto Play feature to spin the game more than once with the same bet.

The game has a wild icon, which is represented by none other than the Pig wizard symbol. The wild pig wizard is going to use his magical powers so it can substitute for any of the other non bonus icons on the reels of the game so it can give players a better chance at earning a payout. The magical pig can also trigger the Magical Wild Reels. This happens randomly during the game play as the pig can appear to turn up to 4 reels into wild ones by casting a magical spell.

The game also comes packed with a bonus icon, which is none other than the Pig Wizard bonus icon. 3 of these icons on the 1st, 3rd and the 5th reel would trigger the bonus round of the game, the Magical Map Bonus that can trigger plenty of prizes and features including free spins.

During the free spins round which is called the Mystery Mirror Spins, the mirror is going to choose a symbol that will be revealed at every mirror at view to help players in getting rewarded.

Microgaming New Slots Slot Apps and Casino Games
Tarzan and the Jewels of Opar
May 5, 2021
0 366