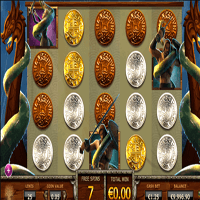 In this video slot, the seafaring Norsemen are depicted not as plundering Viking warriors but as Scandinavian voyagers braving the perils of the sea. Yggdrasil describes the Vikings Go Wild characters as heroes, because their Wild transformation could bring forth exciting rewards in a round of bet-free spins.

One of the great things about this game is that it is loaded with free-spins rewards. The game awards a set of free spins activated by the Viking Ship Free Spins  Symbol. Another set, comprising ten (10) free spins can be won via the Treasure Chest Bonus Game.

An ordinary Wild emblem represents the base game Wild symbol. Albeit ordinary, it can boost payline wins when used as substitute for regular icons. In the Free-Spins Game, players will encounter a special Wild Symbol attribute.

Landing on three or more Viking Ship Free-Spins Symbols will set off the free games. Depending on the number of Viking Ship icons that activated the special round, this Yggdrasil game awards from eight (8) up to 24 bet-free spins.

It is in the Free-Spins Round that the Viking icons, including a lone Shield Maiden could become special Sticky Wild Symbols. However, for those icons to transform into Wild Symbols, they must first defeat a terrifying sea monster every time they land on the reels as spin outcomes.

A regular Viking icon emerging as spin outcome launches a brief animated action scene. It shows the Viking character locked in battle against a sea monster. If the animation shows the Viking as the victor in the skirmish, the regular icon turns into a special Sticky Wild Symbol. If the Viking fails to overcome the sea monster, the Viking Sticky Wild transformation will not happen. As a Sticky Wild, it remains locked in place until the end of the Free-Spins Game.

Vikings Go Wild is an amazing slot by award-winning games developer Yggdrasil, as it makes excellent use of animation in bringing around win-boosting Sticky Wilds in the free games.