It is summer and there is no better place to be than the beach, Net Entertainment understands that and this is why it is inviting all of its fans and players to go to the beach to enjoy a one of a kind surfing experience on one of the most beautiful beaches of the world as they enjoy the breeze, the sun and the water. They will not spend the time there alone as they will be accompanied by a funky group of wave surfers. So grab your bags, pack your swim suits and sunscreen and get ready for this amazing experience.

Being a Net Ent powers game, players can expect to find a game that is presented to them in more than amazing graphics and sound effects that succeed in depicting the theme of the game. This is why players will feel like they have really visited the beach after they are done with this game. The game has 5 reels and a total of 20 lines but the symbols that will spin on them are pretty unique. This is because the main characters of the game, who are the 5 surfers, will not appear in the form of single symbols, but they appear in the form of 3 stacked symbols that form the surfer image. So players can get up to 3 similar symbols on the same reels if the surfer appears on it from head to toe. This helps players greatly in forming winning combos. Speaking of winning combos, players can earn payouts when they get 3 matching icons on a payline from the left to the right on side to side reels. The available payouts can be viewed at the payouts table of the game.

The shark symbol is wild, as it can replace all other icons of the reels of the game. It can appear to help players get paid whether during the main game or during the free spins round. The only symbol that it can’t replace is the scatter icon. The wild symbol would also expand and cover the entire reel it appeared on during the free spins to help players further in earning payouts. The scatter surfer symbol can trigger the free spins round in which players would spin the game’s reels for free. There is also a bonus round that is called the Surfer Team Bonus that is activated when players get the 5 surfers on the reels of the game. 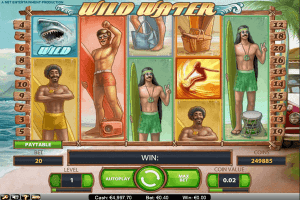 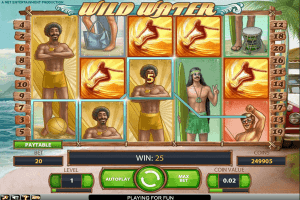 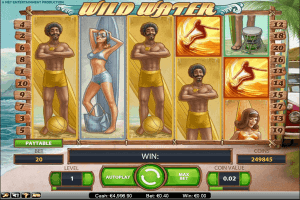 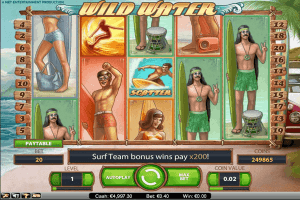