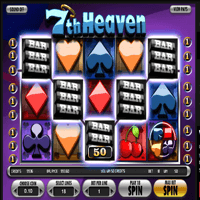 7th Heaven is a 5-reel online slot created by Betsoft for lovers of classic style slot entertainment. The game possesses the appeal of traditional slot symbols with reel icons such as the Lucky Number Seven (7), the Bell, the Cherries, and the BAR BAR BAR. Yet the pay-boosting features are very modern, with its offer of two different rounds of Free-Spins Game, each one using a diverse set of reel icons.

7th Heaven online slot seems to target the older generation of slot players. First off, the reel icons are noticeably extra large, as each image nearly-fills up an entire tile. Secondly, the game has no autoplay function. One could form an impression that the slot is giving 7th Heaven players a zoom-in view and time to examine the outcomes of each spin. Containing 18 paylines to fill in with matched large-sized icons, 7th Heaven proves to be a delight to those who prefer simple slot playing engagement, whilst rewarding as a recreational diversion.

The Wild Symbol is represented by a simple uppercase W. It has been configured to appear only in Reels 2, 3, or 4 as Stacked Wilds of Ws, to subsequently expand as a full-reel WILD signage. In performing its substitution functions, the WILD symbol pays double for any 7 icon that it completes as a payline win.

The Number 7 comes in three different colors, representing the high-paying symbols of the game. The Red 7, pays the highest for every 5-of-a-kind payline match, followed by the Blue 7 and the Green 7 that pay 750 and 500 respectively for the same.

Each set of free-spins awarded features a Card Suit icon as Bonus Suit. This can be a Heart, a Diamond, a Spade, or a Clover. After every bet-free spin, each Card Suit featured as Bonus Suit and appearing as spin outcomes pays bonus money equivalent to a player's initial bet per spin. At the end of the Card Suit Free Round, the game awards payouts comprising wins from matched payline combos plus those awarded by the Bonus Card Suit symbol.

Another special icon to lookout for is the gem icon that comes in varying colors and only in Reels 1, 2 or 3. Three same-color gems appearing simultaneously and anywhere, in any all three (3) designated reels, trigger the launch of the Gem Party Bonus Game. It is a Free-Spins Game, awarding seven (7) bet-free spins and using a different set of reels filled only with colourful Gem images.