Ever played a game that is so much fun that you called it an Astronomical game, well, guess what, this game is just that, and it is conveniently named Astronomical. The game takes players on a greatly entertaining Astronomical experience in outer space where they can enjoy the stars and the planets and the vast universe. Players will quickly catch on the theme of the game as soon as it loads as they will see the start and the deep black space in the background. On top of that, they will also see the name of the game “Astronomical” with bright light and starts shining out of it. The game has a classic setup of 3 reels and one win line that winning combos will be formed on. This payline, like traditional slots, is found in the middle of the reels.

As for the icons that will start spinning on the reels after players have placed the bets, they include the Astronomical logo of the game, alien planets, bar symbols and cherries. Different symbols will give players different payouts whenever 3 of them land on the payline of the game. The only symbols that do not have to do that in order to give players a payout are the bar symbols. This is because according to the paytable of the game, when players get any 3 different bar symbols on the payline of the game, they will be able to claim a payout of 5, 10 and 15 coins depending on the bet that they have placed.

Speaking of bets, players can place 1 coin, 2 coins or 3 coins with different values. This is why the payouts table of the game that is found on the right side has three different columns for the payouts, one for each betting level. Of course, the higher the bet, the better the reward that players can claim.

The logo of the game is not a normal symbol, this is because it is the jackpot symbol that will trigger the biggest pay that the game has to offer. This payout is triggered when players get 3 logos on the payline. They will get to earn from 2000 to 8000 coins. Apart from being the jackpot symbol, it is also a wild multiplier that will substitute for any other icons while multiplying the regular payouts by2x and 4x when 1 or 2 logos contribute in creating a winning combo.

Game Summary
In the online world of casino gambling, 3D video slots rule the day. The top gaming software developers like Playtech, Net Entertainment and Microgaming put a majority of its resources and efforts behind developing innovative slot games that feature recognizable themes and creative bonus games. Lost in the shuffle are classic three-reel slot games where winning money is the most prominent reason to play. Microgaming recently introduced a nice three-reel classic slot game called “Astronomical.” In all the game's basic glory, it actually comes off as a very attractive game. The space-age motif is very colorful and the graphics are clear and enticing. Even the space-age audio soundtrack seems appropriated and helps to establish a futuristic mood. For slot players who are looking to slow things down a bit, this game offers a great alternative to the complicated 3D video slot games with five-reels and tens and hundreds of pay lines. It is best suited for players who are interested in playing the maximum number of coins with a maximum assigned value for each coin. Otherwise, the player is going to find it difficult to win significant amounts of money. If interested, players should find a place that offers free slots and give it a shot.

Bonus Rounds
As a 3-reel slot game, there are no special bonus rounds available.

More Game Detail
When it comes to classic slot games, the fun is in the details. Astronomical comes with three-reels, one pay line and a pretty standard set of symbols. They include cherries, the single bar, double bar, triple bar, red ringed planet (maybe Saturn?) and the “Astronomical” logo, which serves as a wild symbol. The wild symbol is used to substitute for all other symbols during game-play. If the player lands one wild and it results in a win, they are awarded the winning amount with a simple 1X multiplier. If they are fortunate enough to land two wilds on the same spin, the result will obviously be a winning spin that comes with a 4X multiplier. The game's biggest jackpot comes with three wild symbols and a maximum of three coins wagered. The payout is a very generous 8,000 coins. Players have the following betting options. They can wager 1-3 coins with an escalating pay-scale based on the number of coins chosen. They can also choose a coin value of $1-$5 per coin. From a dollar standpoint, the game's largest possible payout would be: three coins with a value of $5 per coin while hitting three wild symbols. The final result would be $40,000. After looking at the remaining pay-scale numbers, Astronomical would be considered a fairly standard three-reel slot game. The game has a low variance, which requires the player to exhibit a lot of patience if the want to invest the money necessary in order to hit the bigger jackpot.

Summary: If a three-reel classic slot game has appeal for a player, they might like this game a bit, even as free slots game. The wild symbol is a unique feature, which allows the player an opportunity to win big dollars. When all is said and done, Astronomical is a decent alternative to the hustle and bustle of today's designer five-reel 3D video slot games. 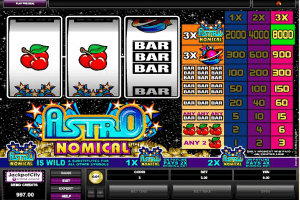 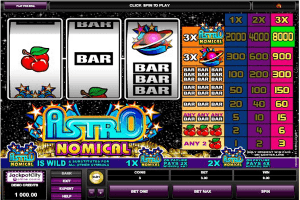 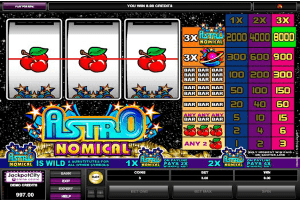 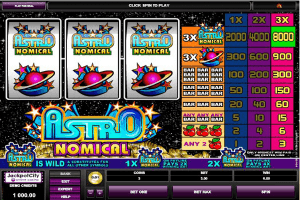