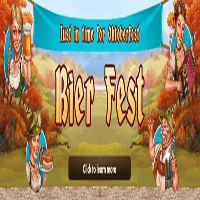 Bier Fest has 5 reels and 25 fixed paylines. The reels do not simulate the standard reel turning motion to produce new symbols. Tile icons collapse to disappear from the screen instead. New ones drop from above to fill quickly the three rows and five columns that constitute the five-reel slot game.

Through Bier Fest, players can have an early Oktoberfest celebration by joining the buxom Beer Maidens, the merry-making Bier Drinkers, the jolly Oompah Band and the delightful Marzipan Pigs featured as high-paying symbols of the game.

Bier Fest slot players have four festivities with which to celebrate in the Oktoberfest-themed slot play: The Barrel Wild occurrence, the Beer Drinking contest, the Wild Pig Racing event, and the Bier Stein Pick-Me Free-Spins round.

Geoffrey Hansen, the Managing Director at Genesis Gaming remarked that the launch of their first exclusively HTML5 game, stresses their commitment to mobile players. Mr. Hansen describes a mobile player as one who requires exceptional game experience, experience that varies and more frequent within a short span of time.

Genesis Gaming's Head of Global Design, Scott Sims said the focal point on player engagement for Bier Fest can be perceived immediately. They have incorporated the frequent occurrence of action and game features mostly in the main game. Mr. Sims takes pride in conveying that each of the special game features builds anticipation by way of fun animation.

Bier Fest has four great attractions that players can experience in the base game:

The Barrel Wild, this feature brings around Stacked Wilds that appear in Reel 3. A Barrel Symbol appearing in any spot in Reel 3 fills the whole center reel with Barrel Wilds. There are occasions when such an occurrence could also result to the transformation of Reels 2 or 4, or both into Barrel Wild-filled reels.

Beer Drinking feature occurs in Reels 2 and 4. Special Bier Symbols that appear in those reels are drank to unravel a hidden symbol that could help form a payline win, or reveal a prize valued at 1x, 2x, 3x or 4x the total bet staked on reels 2 and 4.

Wild Pig Racing is a feature in which three pigs, one for each row, races to the finish across the screen. Each pig leaves behind Wild Symbols in random spots.