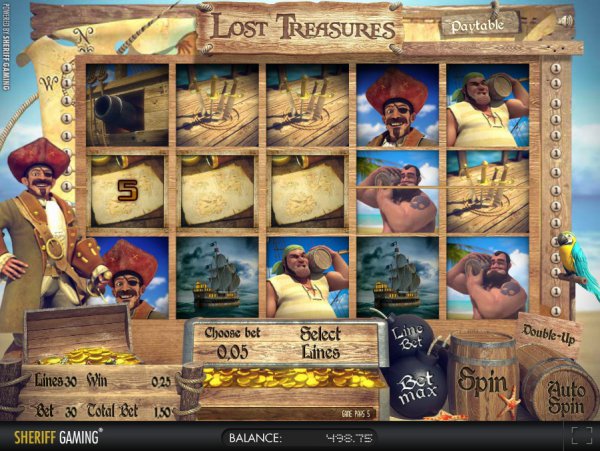 Lost Treasures is a Sheriff Gaming powered 3D slot game. This game will take players into an adventure on a pirate ship as they raid other ships in search for hidden treasure, gold and riches. Players will be able to claim their own share of the loot through the line payouts that the game offers as well as the bonus features and the special symbols. The 3d slot is presented to players in wonderful visuals and great audio effects.

The game is a gift to all of the players who always enjoyed pirate movies and Tv series, especially Pirates of the Caribbean. Although Captain Jack sparrow is no where ot be found on the slot, this does not mean that the game will not provide a fun and an exciting experience, because it does. It achieves that by taking players deep into the theme of the game through its outstanding 3D visuals and sound effects that are immersive and engaging at the same time.

The symbols of the game are scattered across the 5 reels and the 30 winning lines. These symbols are inspired by pirates and the world of pirates. This includes a pirate, a deck worker, maps, gold, treasures, a pirate ship, cannons and swords. The buttons of the control panel of the game comes in the form of gold coins and gun powder. These buttons are at the bottom of the reels and they let players place their wagers and spin the reels of the game. These buttons are a part of the control panel of the game which allows players to control the game play, as they can do anything from placing the bets to spinning the reels and viewing the payouts table of the game to see what the game has to offer.

The parrot is wild, which means it can replace any other symbols on the reels of the game. It would substitute for all other icons on the different lines to help players get a reward. It will not be able to replace the other special icons that the game has. The bonus symbol that can trigger a Click me type bonus round is the treasure-filled chest. Players need to get a minimum of 3 bonus symbols to trigger the bonus round. Players will click on the symbols in order to reveal the great prizes that are underneath.