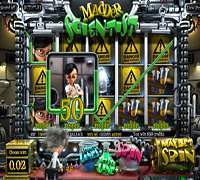 Ever wanted to join a crazy scientist during his crazy and wild experiments in this lab, if so, then this is your chance. Through this game, Madder Scientist, players will join a crazy and wild scientist during his experiments in the laboratory. Players will be sucked into the theme of the game as soon as they open the game through the introductory clip that the game offers to engage players into the theme. That is not all, as all of the visuals of the game, the backdrop of the reel, the symbols, the bonus featrues and the sounds are all inspired by the theme. All of the symbols come in 3D visuals that would turn into animations if they are a part of a winning combo, or whenever players manage to activate a bonus feature.
ning comb

They will notice that the game’s 5 spinning reels and 30 lines are located in the laboratory of the scientist. Not only that as the control panel that players will use in order to spin the reels and place their wagers come in the form of test tubes and beakers that have colored chemicals in them.

This is not everything as the symbols and the soundtrack of the game are also themed around the experiments of the mad scientist. These symbols include test tubes, beakers, chemicals, experiments, a rabbit, a carrot and more. Some of these symbols will become 3D animated symbols when they participate in creating a winning combination on an activated payline. Players will enjoy this game without risking money through this website, freeslots.me, and they will be able to play with real money at Betsoft Gaming powered casinos such as Mr. Green Casino.

The game also has a lot of rewarding features and bonus rounds that will ensure players an exciting and a lucrative experience. One of these features comes in the form of a Click Me kind of bonus that Betsoft Gaming is known for. This Click Me bonus can be triggered when players succeed in getting 3 beaker symbols on the first, third and fifth reels. Through this bonus, players will click on beakers in order to claim the hidden instant rewards that each of the symbols hold. That is not the only special features that the game has, as players can know more about the other special icons and bonuses of the game at the paytable of the video slot.