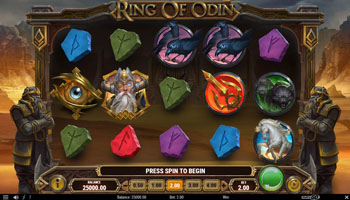 Ring of Odin: A Nordic Themed Slot with Mysterious Items

Ring of Odin takes you on a Nordic Mythology themed adventure as you join Thor and Odin in a thunderous and a rewarding ride. The slot machine has five reels and ten paylines. Despite its small number of lines, it is a pretty rewarding video slot machine. It is thanks to its line prizes and bonus features and unique symbol. So, get ready to travel back in time to the glory days of the Nordic Gods as you search for the Ring of Odin to claim its fortunes and treasures.

Ring of Odin tells a story from the Norse mythology. It revolves about Odin and his magical ring. Odin is the father of all the Nordic gods. He is the god of death, magic, and wisdom. You will go on the hunt for the ring, because of its magical rewarding powers. You will join mythical creatures from Nordic Mythology as you enjoy an action-packed adventure.

The slot takes place during the Ancient times of Nordic Mythology. Therefore, you will find two stone statues, decorated with gold that depict the king of the gods, Odin. You will also see Nordic symbols surrounding the reel set of the new Play n Go slot. As for the symbols that will land across the reels as you spin them, they include Odin, Odin’s Ring Draupnir, and his magical spear Gungnir. They also include Sleipnir, the 8-legged horse, and the wolf guards and raven messengers of Odin Geri, Freki, Huginn, and Muninn.

Ring of Odin has five reels and ten paylines, and you can activate these lines with wagers that lie between 0.10 and 100 credits per spin. There is also an Autoplay function where you can activate up to 100 auto spins. The Play n Go slot has a max reward of 5000x the stake, so when you place the max bet, you can claim up to 500,000 credits. Overall, Ring of Odin has an RTP of 96.2%. You can view all the possible payouts for each symbol at the paytable of the video slot.

Ring of Odin has four bonus features that can be quite rewarding throughout the gameplay. They include free spins, wilds, and multipliers.

The ring has the power to duplicate itself, and it will multiply into nine rings that cover the three middle reels. You can claim up to 9 re-spins that come with Mega Symbols.

If Odin’s Eye lands inside of the ring, it will activate the multiplier free spins. You can claim up to a 9x multiplier, with plenty of free spins.

Microgaming New Slots Slot Apps and Casino Games
Tarzan and the Jewels of Opar
May 5, 2021
0 1583