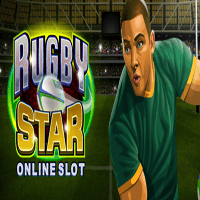 Rugby Star, another sport-themed online slot that Microgaming promised to release this September has finally arrived at Quickfire-powered Microgaming online and mobile casinos. Players will have another football-themed video slot that reminds them of their once in-every-four-years Rugby World Cup viewing and betting experiences. Rugby Star reel icons launch into animated football action whenever one-of-a-kind images of a Rugby hero, create winning ways-to-win combination/s.

The Head of Casino Games at Microgaming, Mike Hebden had commented previously that they expect Rugby Star to be just as popular as other Microgaming sport-themed video slots.

Rugby Star video slot has Stacked Wild symbols that could appear simultaneously as outcomes of a base game spin. When appearing as such, the Stacked Wilds occupy two of the three centre reels, Reels 2, 3 or 4 in particular. This special occurrence is called the “Wild Pass” feature. A base game attribute that randomly produces a pair of full-reel Stacked Wilds as outcome of a spin. It brings great potentials in creating not just one, but multiple ways-to-win combinations.

Combine the “Wild Pass” feature with Microgaming's “Rolling Reels” game mechanism. Actually, fans of Microgaming sports-themed slots are familiar with how the Rolling Reels feature work. It is the same mechanism used in the ice hockey-themed “Break Away” video slots to bring guaranteed wins.

In the base game and in the free-spins round, matched symbols disappear from the screen, causing icons to fall into the gaps. The resulting effect of the “Rolling Reels” feature is similar to a re-spin, but occurring gradually and without the virtual reel-spinning motion. The reel-rolling occurrences could go on and on, for as long as the emerging or repositioned icons find like-symbol matches that create ways to win combinations.

The Rugby Star Free Spins Game is another feature that makes the month-long period of anticipating the slot's arrival, well worth the wait. Activated by the rugby ball Scatter Symbol, the Rugby Star Free-Spins game is likewise similar to the Break Away Free Spins offering. Aside from the Rolling Reels icon-shifting actions that increase opportunities of hitting ways-to-win matches, the free-spins game has a “Multiplier Trail” element.

Free-spin wins are paid out in folds because of the “Multiplier Trail” feature. Starting with a 1x multiplier, the feature creates a trail of increasing multipliers after every Rolling Reel win, with potential to reach up to 10x during the free round.