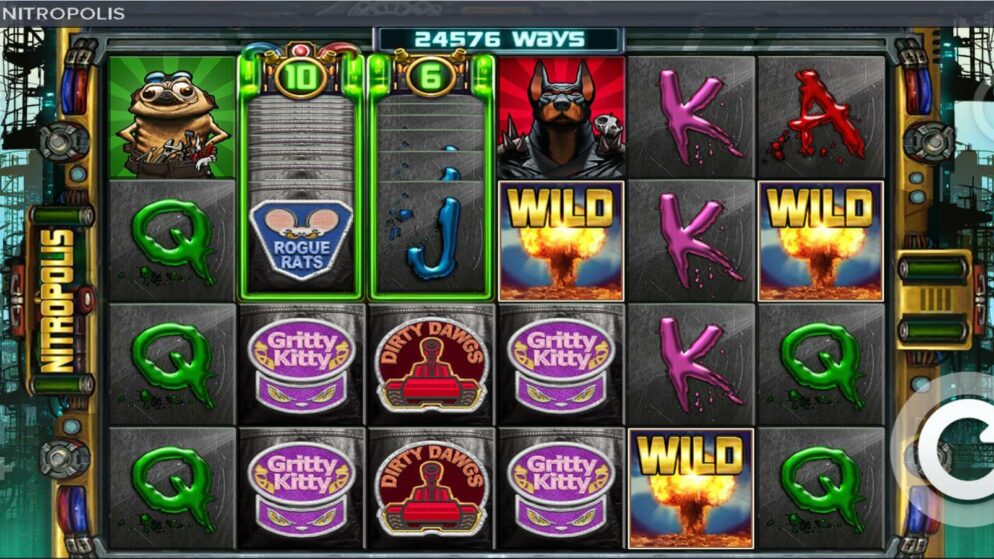 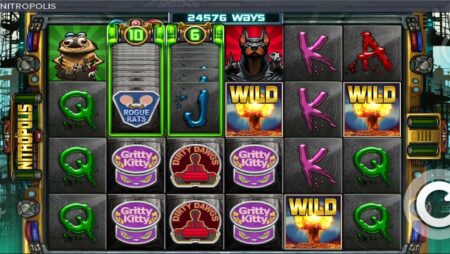 Pros
Nitro Reels, Free Spins and up to 85,155,840 winning ways
Cons
Soundtrack gets a bit tedious after a while

Nitropolis by Elk Studios is a highly rewarding game with a quartet of animal gangs living in the dystopian Nitropolis city. The game has six reels, and it starts with 4096 ways to win, which can increase up to 85,155,840 winning ways. There is also the Nitro Reels feature, where the number of symbols can appear in a pair of positions that can get as high as twelve. Other highlights of the slot machine include Sticky Nitro Reels, re-spins, and free spins.

Are you ready to travel into a post-apocalyptic world? That world is dominated by a quartet of animal gangs that are engaging in a deadly turf war to control the criminal underworld of the explosive Nitropolis city. The game is by Elk Studios, and it creates an immersive ride in that world. These four animal gangs are dirty dawgs, pug thugs, rogue rats, and the gritty kitties. The city has toxic air and grim visuals that depict the underground criminal belly of Nitropolis. The slot machine is already quite successful, that the developer has created a sequel that takes place in the same world, Nitropolis 2.

The game is a post-apocalyptic themed video machine that showcases the four animal clans on gritty visuals. The game has a comic book feel and aesthetic, which takes place in the city of Nitropolis. The visuals are both bright and colorful, and the cartoon style fits the theme perfectly. Somehow, the game looks like it takes place in the world of Judge Dredd. As for the soundtrack of the slot, we can say it is an acquired taste.

So while it is immersive, it can push some people to mute it after a while. The symbols that you will see on the slot's screen include Graffiti styled A to J royals as well as the emblems of the four gangs. There is also the head of the Dirty Dawgs, who resembles the Terminator. So get ready to enter the industrial wasteland and enjoy an immersive ride on your smartphone, laptop, or tablet.

Nitropolis slot machine has six reels which offer a minimum number of ways to win of 4096. To create a winning combo, to have to land three or more on the same way to win on adjacent reels, and they have to start from the first reel on the left. You can adjust the coins for your wager on the left-hand corner, where you can place from 0.20 and 100 credits for each spin. There is also the Quickspin and Auto spin function which allows for 100 auto spins. The RTP of the slot sits at 96.1%, which is above average. It is of high variance with a max win of 10,000x.

The gameplay is rather unusual in Nitropolis, with expanding Nitro Reels. The game has the Nitro Reels feature where symbols can expand and offers up to 85,155,840 ways to win. Nitropolis also has a re-spins feature where some symbols are locked, and others are re-spun to help you trigger a winning combo. Nitropolis has a bonus free spins round that can trigger up to 25 free spins. There are also some goodies that can become active during the free spins, such as Nitro Reels being sticky and more.