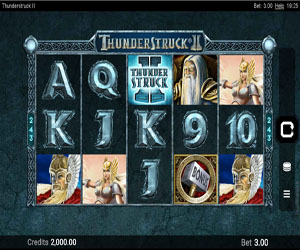 Thunderstruck II Re-mastered has the same theme and symbols as the original slot machine. The slot machine is themed around the Nordic gods. Therefore, you can expect to find a lot of symbols from the Nordic Ancient Mythology. You will rub shoulders with the likes of Odin, Loki, Thor, and Freya, to mention a few. You will join Thor and the other gods from the Nordic Mythology, as well as brave Viking warriors, in a one-of-a-kind experience.

Click the Image to Play the Fun Play Version

The visuals of the game are crisp, and the graphics are immersive. You will see a blue stone background that looks like the stone floor of ancient temples. The symbols include all of the big names from Ancient Nordic Mythology. They include Odin, Loki, Thor, Freya, and more. Other symbols include a Viking ship, a Viking shield, Viking warriors, and poker card symbols.

The stakes that are available at the slot suites all pockets. It is because you can place wagers that start at 0.30 and end at 15 credits for each spin. The slot also has the Auto Play function, where you can set up to 100 spins, in addition to the Quick Spin button. The max reward that you can earn at the slot machine is equal to 8000x, which is through the free spins, through the Wildstorm feature. Overall, the slot machine has an RTP of 96.65%.

Thunderstruck II Re-mastered, as a Microgaming game, packs plenty of bonuses and features. For starters, the slot has a wild symbol, which is the logo of the game. It can replace all other symbols appearing on the reels to help create the highest paying combo. It will also double the payouts it helps in creating. There is also the Wildstorm feature that can become active t random. It will turn up to five reels completely wild, which will result in many winning chances. Last but not least, there is a free spins round, the Great Hall of Spins. You will be able to enter numerous free spin rounds with different high-paying features.

Charlie Chance XREELZ is one of the new games by Play n Go. The video slot has five reels, 243 ways to win, and a wide array of features.

Diablo Reels is a fantastic game by Elk Studios that belongs to its Elk Classic Series of slot machines.