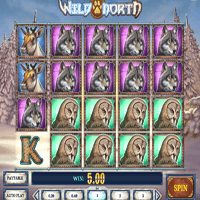 Showcasing some of Scandinavia's forest denizens such as the lynx, the brown bear, the reindeer, the owl and the wolf, the Wild North video slot uses their images in bringing around seven (7) bonus games. A Scandinavian phenomenon, the Northern Lights, takes on form in this PlaynGO video slot as the Scatter Symbol that brings around the Northern Lights Bonus Game.

The Lynx icon takes center stage as the game's Wild Symbol. Substituting for any regular symbol, the Wild Lynx comes to the screen as a regular Wild in both the base game and free spins round. Except that in the Bonus Game, the Lynx Wild Symbols appear as Stacked Wilds

The Great Wilderness Free Spins Game, awarding three bet-free spins that could generate Mega Symbols of each featured Scandinavian wildlife. A Mega Symbol here is a full-blown 4×4 illustration of a Wild North slot animal, spanning reels 2, 3, 4 and 5. Only the first reel contains three different tiles. This means that if one of the animals appearing on Reel 1 is the same as the Mega Symbol, the rest of the reels are already a match.

Running Reindeer Free Spin bestows a single bet-free spin that guarantees the appearance of the Reindeer symbols stacked on 2, 3, or 4. A re-spin could occur if the Reindeer icons create a full 3×3 block, and covers all three reels.

Savage Bear Free Spin also awards one free spin that comes with a win multiplier symbol that increases the win value of the bet-free spin anywhere from 5x up to 30x.

Wolf Pack Bonus is another single spin free turn that produces a blown-up 2×2 image of the Wolf icon. Here, the wolf symbol serves as a Sticky Wild symbol. If regular Wolf icons appear in addition to the 2×2 wolf image, the reels automatically launch a respin until a win is achieved.

Eyes of the Owl another one-spin free turn that delivers a blown-up 2×2 image of the Owl icon. Similar to the Wolf Pack free spin, the Owl is Wild and Sticky to launch into re-spins until a win is achieved.

In all of the seven bonus games, the Northern Lights Scatter Symbol is not active.

Microgaming New Slots Slot Apps and Casino Games
Tarzan and the Jewels of Opar
May 5, 2021
0 1411