A While On the Nile

Have you ever watched movies about Ancient Egypt and the era of the pharaohs? Have you read about them in your history class and just wished you could go to that exciting and historic time period? So you can enjoy the rich culture and a great adventure in the land of the Nile? If the answer is yes, then you are really going to enjoy this game, it is called A While on the Nile and it offers players just that, as it offers players a chance to enjoy a while on the Nile in the time era of the pharaohs. So grab your gear and get ready for a one of a kind experience at freeslots.me where you will accompany the pharaohs and getting to grab your own share of their treasures and fortunes. This is because the pharaohs were well known for their golden treasures and riches. 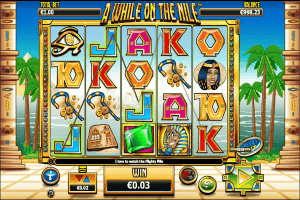 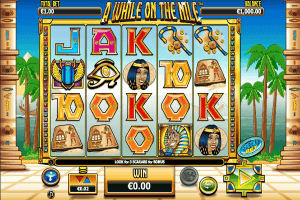 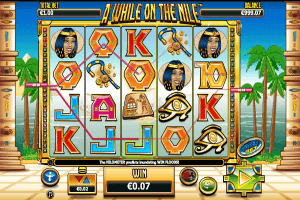 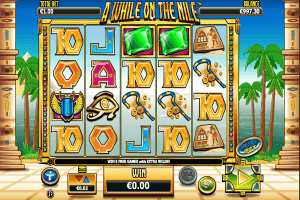 The game has 5 reels with fifty paylines. Players will see that the reels are located inside of an Egyptian temple with ancient Egyptian columns on its two sides. You can also see the beautiful blue water of the Nile right behind them. Even the symbols that spin on the game’s reels are lines are inspired by the theme as they include a beautiful female pharaoh, a pharaoh king, the king’s scepter, rocks with ancient Egyptian writings and symbols, a colorful scarab and a golden Egyptian eye as well as poker card symbols.

The smiling pharaoh symbol is wild, which means that whenever the pharaoh lands on any of the reels, he will use his powers in order to substitute for any of the rest of the symbols, except other special icon, to help players in getting paid by forming a payable combo. The other special symbol is the green emerald. It is the scatter icon of the slot, which means it pays out multiplied scattered rewards and it can also activate the free spins round of the game. Through this round, players can earn 5 free games that come with random wilds as random symbols will turn into wild ones during the free games.

The game also comes with the Super Bet feature. The feature allows players canto increase their bets in order to active more ways to win. It also gives them the ability to win great rewards with stacked wilds and much more.