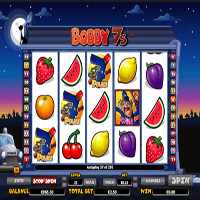 Bobby 7s is a 5-reel, 25-payline online slot. Apparently NexGen Gaming designed and developed the game with the British online slot players in mind.
First off, the reels are adorned with fruit icons, such as cherries, strawberry, plum, lemon and watermelon. Fruit-themed slot machines are after all, quite popular in British pubs and clubs; thus earning for itself the “fruities” moniker. Secondly, a bobby in the UK is a police officer and Bobby 7s cartoon illustration incorporates animated scenes of a British beat cop chasing a thief.

To add more of the classic slot appeal, NextGen Gaming cleverly conceptualised the Lucky Number 7 as the win-boosting attributes of the Bobby 7s slot. Each 7 icon could bring around three different instant-win games collectively called as the 7s Features.

Three 7s represent three usual characters in a crime story, a police, a crook and a judge.

The Police 7 icon appears only in Reels l, ll, and lll. A spin outcome that returns with a Police 7 in each of those reels all at the same, launches the Hi-Lo instant win game. A Hi-Lo arcade game simply entails placing bets on one's prediction that the next number would be higher or lower than the number currently displayed.

If a Hi-Lo player makes a correct guess, he or she will be able to move a step higher in the game's Cash Ladder. Each rung has a specific win value multiplier that could reach as high as 500x a player's total bet per spin. A wrong prediction ends the mini-bonus game, and the bonus player's total bet would be multiplied by the highest value-multiplier attained in the Cash Ladder.

The Crook 7 icon emerges in Reels lll, lV, and V. Three Crook 7 icons appearing simultaneously in all three reels will furnish players with win-multipliers hidden behind each Crook 7 symbol. A player has to click on one of the Crook 7s icons in order to reveal and receive a mystery cash prize. Bobby 7s game info states that the multiplier reward could reach as high as 40x a player's total bet.

The Judge 7 symbol appears in Reels ll, lll, and lV. In this instant-win feature, the Judge icon launches into animated gavel-pounding actions. The number of pounding actions made represents the number of the value multiplier awarded to a player.

The Thief plays an important role in this game. The character completes the cop-and-robber tandem, as the comical chase will happen throughout the Free-Spins Round. Appearing only in Reels l, lll, and V, a simultaneous appearance of three Thief Scatters, one in each Reel, triggers the launch of the Bobby 7s Free-Spins Round. The game awards 20 bet-free spins, in which the prizes are doubled for all winning paylines achieved in the bonus round.

In addition, the three (3) Thief Scatter Symbols grant 2x the total bet, while the free round can be retriggered by the emergence of another set of Thief Scatters.

The Bobby of course is the Wild Symbol that could stand-in for regular icons as means to complete matched payline combinations. The Bobby Wild also pays for matched Wild combination. It pays 10, 50, or 100 coins, for every 2, 3 or 5 Bobby icons appearing in active paylines.