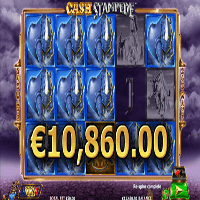 This fresh NextGen title is a colourful montage of savanna wildlife with each animal icon taking center stage as Cash Stampede Wild Re-spin trigger symbol. An implied rushing motion of any of those wildlife symbols could bring an onslaught of re-spins in which the animal trigger-symbols remain in place.

Although there are 243 ways-to-win, the bet amount per spin is the equivalent of the coin value selected, multiplied by 25 win ways. The lowest bet per spin is 0.25 (0.01 x 25 win ways) while the highest is 50.00 ( 2.00 x 25 win ways.) The higher the payout value of the animal re-spin trigger-symbol, and the amount of bet staked per spin, the greater the wins that could possibly be achieved from playing this latest game from NextGen.

The Cash Stampede Logo is the Wild Symbol and its substitution functionality plays a significant role in bringing around the re-spin actions. In the base game, the Wild appears in any position only in the third reel (Reel 3).

If the Cash Stampede Logo helped create a payline win constituted by a Wildlife Animal symbol, such as the Antelope, Buffalo, Elephant, Rhino and Wild Horse, the win sets off a re-spin action. During the re-spin, both the Wild and winning Wildlife symbols stay in place, while the reels turn to produce a new set of spin outcomes.

The best outcome is one that contains more of the wildlife icon that triggered the Cash Stampede Wild Re-spin feature, because the reels will continue to turn to produce another set of icons. Since all animal trigger symbols and Cash Stampede Wilds remain in place, continuing re-spin occurrences could likely fill the 3×5-reel grid with the animal trigger-symbols. Such an outcome naturally results to a tremendously huge win, albeit depending on the amount of bet staked per spin.

The win possibilities are greater during the Free-spins Bonus Game. The bonus game reel already has a Cash Stampede Wild embedded at the center of Reel 3. Each bonus round awards eight (8) bet-free spins, optimised with a Cash Stampede Wild already in place. This set up increases the likelihood of forming matched animal symbols that make use of Wild Symbol substitution, therefore triggering more re-spins.