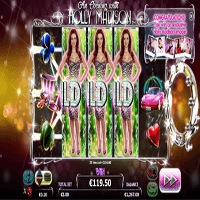 Holly Madison is one of Playboy billionaire Hugh Hefner's celebrated girlfriends, who carved a niche for herself as the host of The Girls Next Door reality show. The TV series is also known as The Girls of the Playboy Mansion, as it features mainly the colourful, true-to-life experiences of the women who came to live at the Mansion as one of several official girlfriends of the Playboy founder. Holly Madison rose to Girlfriend No. 1 status, until she decided to leave the Playboy Mansion for good in 2008.

Holly's image is the game's Wild Symbol and emerges only in Reels 2, 3 and 4. It substitutes for regular icons to help players create matched combinations in any payline. The Holly Madison Wild goes wilder still, when it expands into a full-body photo, filling-up any of the aforementioned reels.

The Wild Expansion occurrence takes place only if the outcome will produce additional payline wins. Denoting that once a regular Wild transforms into an Expanded Wild, players are sure to reap rewards achieved via multiple Wild-aided payline wins. Wild Expansion can happen simultaneously in all three reels and the occurrence will surely result to a Big Win!

The psychedelic-themed Holly Logo is the Scatter Symbol appearing anywhere in any reel. The appearance of two or more of such symbols regardless of reel position, awards Scatter Pays of 25, 50, 125, and 1250.

The Scatter reward is multiplied by the bet staked on the spin that produced the outcome. In addition to Scatter Pays, the Holly Madison online slot launches a Rockin' Respin for every two of such symbols appearing anywhere across the reels. During the Rockin' Respin action, the reels with Scatter Symbols remain immobile, while the rest of the reels launch a free-spin.

The simultaneous appearance of three or more Scatter Symbols triggers the Holly Madison Free-Spins Game. Awarding ten (10) bet-free spins as standard number of free games, there could be more since the Rockin Respin element remains active. If another set of three or more Scatters emerges as outcome of a free-spin, then another set of ten (10) bet-free spins will be added to the round.

The Free-Spins Round randomly produces KISS icons in Reel 5. Players can collect as many as ten (10) KISS icons, to which the related Pick Me bonus game will be played at the end of the free round. Each KISS collected offers a chance of adding more winnings based on the total amount of free-spins wins. The more KISS icons collected at the end of the free round, the greater a player's chances of increasing his or her bonus wins in folds.