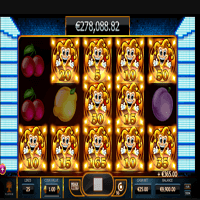 Joker Millions is Yggdrasil Gaming's first online video slot with progressive jackpot offering. The five-reel slot entertainment has 40 paylines in all, as it pays both ways. Twenty (20) paylines represent the standard win patterns originating from left to right. The other set of 20, are those originating from right to left, following the same set of paylines.

The regular reel icons are classic symbols comprising the Lucky Number 7, Bell, Cherries, Plum, Lemon and Watermelon. The Lucky Number 7 is the highest paying icon, awarding 750 coins for every 5-of-a-kind appearing in a single payline. The lesser paying symbols though could also bring substantial coin rewards, when emerging as Stacked Symbols in multiple reels during the Freeze Column feature.

The reels or columns in which winning symbols appear stay locked or frozen in the next spin. Yggdrasil calls the occurrences as the Freeze Column Feature, which increases the likelihood of forming multiple payline wins in the succeeding spin. Continuing win occurrences could create additional Frozen Reels, whilst filling up the entire slot screen with the same set of like symbols.

The greater significance of the Freeze Column feature is that when Reels 1 and 2 become frozen and filled with one-of-a-kind symbols during the next spin, a corresponding Win Value Multiplier is activated. The Multiplier number depends on the number of frozen columns in play.

Let us say the first two adjacent Frozen Columns carry the same icons, a 2x Win Value multiplier will be in play and will apply to all payline wins. If the third, fourth or fifth reels are also frozen and filled with the same symbols, then the Win Value Multiplier likewise increases to 3x, 4x or 5x consequentially. The Win Value Multipliers though are not available in the Joker Millions Jackpot Spin.

About the Joker Millions Jackpot Spin

The Joker here is not a Wild or Scatter Symbol. Yet it is the icon to watch out for as the appearance of at least five (5) Jokers in all five reels activates the Joker Millions Jackpot Spin. The round also follows the mechanics of the Frozen Column Feature, as this would enable slot players to vie for the Progressive Jackpot at Stake. The Jackpot Spins continue for as long as more Jokers appear as spin outcomes. Those who succeed in filling up all five reels with purely Joker symbols get to win the pooled money offered as jackpot.

In addition, every Joker Symbol has a mystery prize to award Joker Millions Jackpot players. Starting with the minimum five (5) Joker icons that triggered the round, instant cash prizes would be awarded to Jackpot Spin players. If more Joker icons appear subsequently in the succeeding spins, it denotes more rewards will be awarded as instant wins for the related bonus spins.

To activate the Joker Millions online slot game, bets must be placed on all 40 paylines. The coin value selected, which can be any amount between 0.01 to 1.00 represents the amount staked per payline. Based on the coin value placed as bet per payline, the minimum bet per spin therefore is 0.40 (0 01 x 40 paylines), while the maximum is 40.00 (1.00 x 40 paylines).