Next Gen Gaming has released a game a few years back called Medusa, it was a Greek mythology themed video slot that was inspired by the story of Medusa, the vicious titan with snake eyes for hair who can turn any human into stone if they make eye contact. The game was exciting, fun and rewarding. This is why the video slot machine became a huge hit and became one of the most popular and successful video slots of Next Gen Gaming. As a result of that success, the software developer has decided to re visit that theme and provide players with a more exciting and a more rewarding video slot machine, Medusa II. So if you have been hitting the online casinos to enjoy Medusa, then you will surely enjoy this sequel that you can check out right here on freeslots or you can head to online casinos such as Guts in order to place real money stakes on the game’s reels. 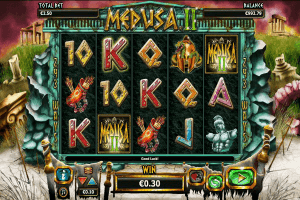 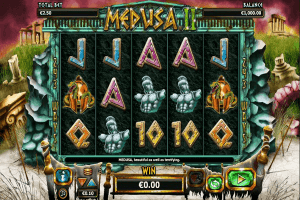 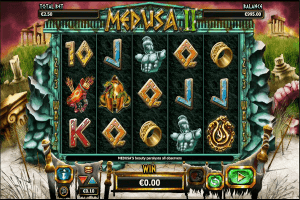 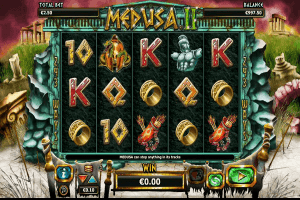 The game does not have any paylines, since it is a 243 ways to win video, which means that players will have more chances of creating a winning combo of symbols. Players can check to the formation of these ways on the slot game’s reels by opening the paytable of the game. As for the icons that will be spinning on the game’s reels, they are all inspired by the Greek mythology theme of the game. They include a Greek marble statue, golden rings, Greek themed symbols, Medusa, bow and arrows, a Greek soldier’s helm and card symbols.

Since the game is brought to you by Next Gen Gaming, players can expect a great set of rewarding features and special rounds. For example, during the main game, a Greek soldier might appear out of nowhere and tries to attack Medusa, she will look at him and turn him into stone in order to reveal a stack of wilds.

Medusa is the wild icon as well as she can replace all other icons on the game’s reels and ways so players can earn a payout by forming a winning combo. It can also appear stacked on the reels. The logo of Medusa II is the scatter icon that will give great pays as well as trigger the free games bonus round of the video slot. Players will earn 10 free games with the Looked spin feature.