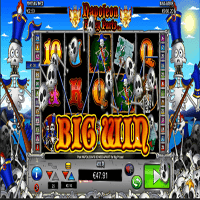 The game features as highest paying icons an equally boney illustration of a female skeleton icon and Napoleon's formidable barque or masted sailing vessel. The She-Skeleton icon and the Barque's payout starts with two matched symbols. The two images also pay generously for every five-of-a-kind matched symbols. The She-Skeleton icon pays 5,000 coins, while the Barque pays 2,000.
This amusing online video slot offers a delightful arcade-style bonus game that can be triggered by the game's Wild Symbol

Sporting a hat very similar to the French Emperor's iconic bicorn hat, the game's Napoleon Boney Parts (NBP) character is the Wild Symbol. It appears only in Reels 2, 3, or 4 as outcome of a spin. Aside from posing as Joker Card to use as replacement for regular symbols that would complete a payline, it is also the trigger symbol for the NBP Pick-a-Bone Bonus Game.

When a spin produces an NBP icon in each of all three reels, all at the same time, such an occurrence launches the Pick-a-Bone Bonus Game. Presented via a tableau in which Napoleon Boney Parts is giving his skeleton army some kind of pep talk, players will get to ruin NPB's speech by pulling three clickable skeletal parts.

Each bone has a random cash prize. If a bonus game player picks a bone that could topple down the Napoleon Boney Part character, a player wins a Big Prize. All prizes awarded in this mini game are calculated based on the bet that triggered the Pick-a-Bone Bonus Game. If the game occurs during the bet-free round, the cash prize will be based on the spin that triggered the activation of the free game.

An imperial Coat of Arms bearing a crest similar to that of the French Emperor's emblem is the Scatter Symbol. As such, it could appear in any position across the reels. Three or more Coat of Arms Scatters can activate the Napoleon Boney Parts Free Games. In addition, the simultaneous appearance of three, four or five symbols awards Scatter pays ranging from 5, 15 or 500 respectively. Scatter Pays are based on the total amount staked on all bet-activated paylines.

Ten free spins are in play during the bonus round. All winning paylines achieved during the free games pay twice the regular payout equivalent of the winning symbol. Scatter coin-rewards are multiplied by the total bet wagered on each spin.

Players can choose to activate all 25 payline or select any of the available pay patterns. The bet per payline is anywhere between 0.01 and 2.00. The total bet per spin is the coin value selected multiplied by the number of paylines activated. The highest possible bet is 50.00 (2.00 x 25 paylines), while the lowest is at 0.25 pence/cents ( 0.01 x 25 paylines).