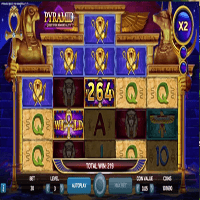 NetEnt is giving slot fans a sneak peek of a new slot content entitled “Pyramid Quest for Immortality.” Slated for release on October 22, 2015, the Egyptian-themed slot will become accessible on said date for both mobile and desktop gaming.

The official NetEnt video trailer shows “Pyramid Quest for Immortality” as a slot with 720 ways-to-win. The reel icons are set in an unconventionally structured 5-reel layout. The first and fifth reels have three (3) tiles in each column, while the second and fourth reels have four (4) tiles. The centremost reel or the third column has the most number of tiles, having five (5) in all.

The entire reel layout depicts an ornate shrine, containing symbols of Egyptian deities such as that of the Hawk God, Horus and Vulture Goddess, Nekhbet. The shrine is a constant reminder to the Egyptian people who believe that Pharaohs are immortal beings. As Divine Rulers, they go through death, only as a means to move forward to the next life.

How the NetEnt Avalanche Feature Works

The non-traditional layout though is more than just a design but a way to bring around the “Avalanche Feature.” It is the same game element used by NetEnt in “Gonzo's Quest.” The preview shows reel icons falling into gaps created by matched one-of-a kind symbols that explode after completing a ways-to-win combination. After which, only the topmost tiles will have new icons.

If the new positions and the new icons create another ways to win combination, the tiles continue to fall into new places. In effect, the Avalanche attribute creates an action similar to a reel re-spin.

The trailer shows that NetEnt made it even more possible for the Avalanche Feature to stay active. Based on the video teaser, if the new icons produced by the topmost row instantly create a win, the exploding topmost icons are automatically replaced by Ankh Wild Symbols.

Although NetEnt fans still have to wait more than a month before the “Pyramid Quest for Immortality” goes live in NetEnt-powered online facilities, the arrival of “Hook's Heroes” is fast approaching. NetEnt previously announced that the new and wacky pirate-adventure themed video slot will roll out on September 23, 2015.