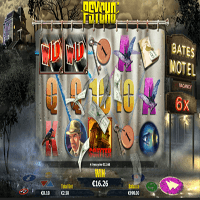 A Marion Crane image, depicting the female lead character and victim to the psychologically disturbed Norman Bates in the movie, represents the game's highest paying reel-icon. Quite interestingly, the second highest-paying reel-icon is that of Detective Arbogast, instead of Bates. The latter appears only as a shadowy figure of the killer behind the shower curtain. When appearing in any of the slot's 25 fixed paylines, the Marion Crane icon pays 1,000 coins for 5-of-a-kind symbols. Five-of-a-kind Detective Arbogast images pay 500 coins.

Still, Bates' sudden and random appearances during the reel-spinning motions are quite significant. He is the knife-wielding persona slashing the shower curtain backdrop, revealing the Wild Symbols. The randomly generated Wilds apply value multipliers to winnings achieved through its icon-substitution function.

In the base game, a knife-wielding hand appears arbitrarily to reveal a Wild Symbol with a Win Multiplier ranging from 2x, 3x, 4x, 5x, 10x or 20x. In the Free Spins Game, the obscure homicidal figure of Norman Bates follows the story line. The illustration is suggestive of a female figure, which the thriller movie hinted as that of Norman's mother Norma Bates. The dim figure then carries on with the random Wild revelation via the iconic Psycho Shower Murder Scene, which the game info states could have Wild Multipliers of up to 40x in the free game.

In addition to the Wild Win Multipliers, the Wild Symbol pays for matched Wilds appearing in a payline. Starting with two, up to five Wild Symbols, the Psycho online slot pays from two (2), to 25, 250 , or 1250 coins. The equivalent payout is then multiplied by the value of the bet staked per spin.

Aside from Scatter Pays, three or more of the Bates House Scatter icons launch the Free-Spins Bonus Game. Depending on the number of Bates House icons that triggered the free round, Psycho slot players stand to receive 10, 15, or 20 bet-free spins as bonus game.

All 25 paylines are in play with each spin. The coin values available to use in placing bets for each spin range from 0.01 to 2.00. The lowest possible bet therefore is 0.25 for each spin, while the highest maximum bet allowed is /€/CAD/AUD50.00. The bet value placed on each spin is important since all payline wins, including those paid in folds by the wild Win Multiplier, as well as those awarded as Scatter Pays, are multiplied by the amount of bet staked per spin.