Next Gen Gaming has previously released a game that has a similar name, it was Jester Jackpot. It was a classic three reeled slot machine that offered players the thrill of traditional slots. Due to the great popularity of the slot machine and its great success at Next Gen Gaming powered casinos, they have decided to launch a sequel to the game that is more entertaining, more exciting and gives greater rewards. For example, the biggest payout which is the jackpot award of the game is equal 50,000 coins. This is why the game is called Jester Jackpot 50,000. 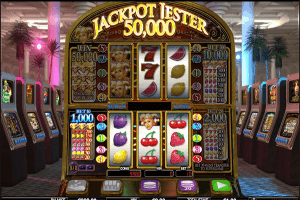 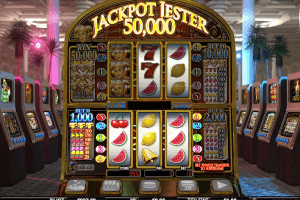 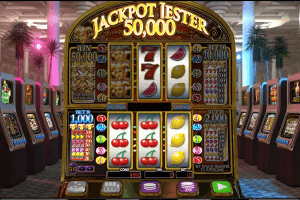 Apart from the great payout, the game offers players a more authentic experience as it will take them straight into the slot machine halls in Las Vegas casinos. This is why players will see the slot machine they are going to play, the Jester Jackpot 50000 in the middle of a hallway with rows of slot machines on its two sides. They will also see the same decorations, bright lights and carpets that they would see at real land based casinos.

Even the slot machine looks really authentic, the only thing different about it is that it has a pretty special setup. It has 5 reels and 5 paylines, which is normal, the special thing is that there are two sets of reels. One at the bottom and one at the top, when players have placed the bets and start spinning the reel and create a winning combo, they will be able to click on a button on the control panel in order to take the game to the upper reels where they will be able to spin the reels for free for another chance to earn a payout.

Speaking of payouts, the game’s paytable is found all over the machine, just like classic and traditional slots. Players will see the different combo of symbols that will make them eligible for a payout and their respective payouts. The symbols that will land on the reels include cherries, lemons, golden bells, watermelons and plums and of course, Jester the clown in his clown hat. Jester is the one responsible for triggering the jackpot of the game. Players will earn the 50000 coins when they place the max bet and get three jester symbols on any of the 5 paylines of the slot.