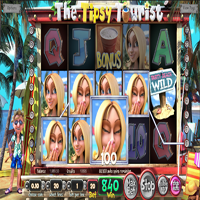 The Tipsy Tourist, the latest Betsoft 3D video slot is now available for real money recreational gambling. The fresh off the pipeline video slot revolves around a summer holiday vacation of a hardworking fellow named Gary. Presented in a 3×5 grid containing 5 reels and 20-fixed paylines, the summer-themed 3D slot provides a form of escapism for those longing to get out of their daily grind, but simply could not find the time or opportunity to do so.

The VP of Sales and Marketing at Betsoft, Mark McKeown, described the Tipsy Tourist 3D video slot as a fun filled game that makes for a wonderful late summer recreation. It has all the classic elements of a compelling game, presented in Betsoft's unmatched authentic 3D cinematic quality and spirited game play. Mr. McKeown said they feel that the engaging theme will rub-off even just a bit of the ideal Miami holiday to online slot players, as suggested by the graceful tropical palm trees and cool ocean hues.

The Tipsy Tourist starts with a brief movie-like introduction of the hardworking Gary, who appears badly in need of time away from his seemingly monotonous office work. While having his coffee break, Gary finds a brochure for a Miami beach vacation package lying around. That is how Betsoft's new 3D character finds himself as the main theme of Betsoft's new video slot. As to how Gary became the Tipsy Tourist, online slot players can find out by experiencing the game itself.

About The Tipsy Tourist Pay-Boosting Features

This new Betsoft 3D slot has a Wild Feature that emerges only in Reels, 2,3,4 and/or 5. Represented by the Party Beach signage, the Wild Symbol becomes Sticky during the Free-spins Game.

An iconic Beach Ball serves as the Scatter symbol that activates the Free-Spins Game. Appearing in any position in reels 3, 4 and 5, the simultaneous and consecutive appearance of the Beach Ball Scatter symbols in each reel triggers the activation of eight (8) free spins.

In addition to the Free-Spins round, The Tipsy Tourist also has a Bonus Game that brings guaranteed wins. Three Red Cups appearing as outcomes of a spin, sets off the interactive Drinking Bonus Game where a Bonus Player and Gary are competitors in a beer-drinking contest. The Bonus Player and Gary takes turn in guessing the outcome of a flipped coin, whether the coin lands on a Tree or Cup symbol. If a bonus player makes a correct guess, Gary will take a swig from the red cup. Conversely, if a bonus player makes an incorrect guess, he or she will drink the content of a red cup.

However, it is important for Tipsy Tourist bonus players to make as many correct guesses as they can, as doing so brings greater chances of winning a greater number of coins . Once a bonus player's cup or that of Gary's runs dry, the Bonus Game ends. Gary ending up as the Tipsy Tourist denotes only one thing, a bonus player won big from the Drinking Bonus Game.

In addition, Betsoft's new Tipsy Tourist 3D video slot has a Gamble Game option, which in Betsoft's version is called the Double Up game.